The opening decade of the 21st century was expansive and hectic for Barstow Community College. Strife between faculty, administration and board members ran rife in the opening years. The vocational programs at the school expanded, as did academic and transfer programs. The college offered important enrichment courses—including a course on Desert Rescue.

Student numbers increased. Science and computer labs were upgraded. More courses were offered on the main campus and at Ft. Irwin. Hollywood came to campus in the form of award-winning actress Julia Roberts, and casting calls for film extras. The Student Life division gained new leadership.  A proposal for blending the public library with the college library was proposed and defeated. In 2002, the campus held its first Festival of Lights and  and Learning—a fundraising event supporting student scholarships.

Funding was set aside for a new college learning center, which included a library, computer commons and offices.  In the realm of the macabre, the school became part of an actual murder mystery. All in all, the first decade of the new century was a busy one.

Tensions between faculty, administration and board

Throughout the opening decade of the 21st century, tempers flared between faculty and administrators at Barstow College. Issues revolving about academic schedules, dominated the conflict.

The Faculty Senate maintained that the college Board of Trustees violated California labor law when they approved the 1999-2000 academic calendar without faculty consent.

Faculty Senate Representative Mark Cauble told the board during a Dec 9, 1999 meeting that the Senate planned to file an unfair labor practice violation complaint. Faculty had gone on record opposing the board’s decision to move Fall finals to December 18-22. “We recommend that the board reconsider this,” Cauble said. (Desert Dispatch) By November 2000, the board and faculty reconciled and a new academic calendar was approved. 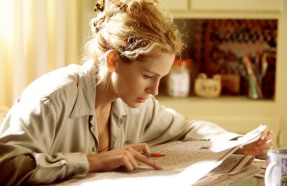 Award-winning actress Julia Roberts visited the Barstow campus while filming “Erin Brockovich: in nearby Hinkley. Brockovch is an environmental rights and health advocate who took on a major  water contamination case against PG&E. Many Hinkley residents and their pets contracted deadly and rare cancers as a result of toxic contamination.

Roberts explained that she works hard to concentrate on developing her characters in film and always tries to keep focused. “I am always trying to do the best I can,” Roberts explained. She said she admired Ms. Brokovich, who stood against the corporate giant in defense of the people. (Daily Press). Roberts encouraged struggling student actors to keep focused and concentrate on their studies.

“Do the best you can,” She said, “and be persistent.” (Daily Press)

In other entertainment news, representatives of MTV came to campus searching for student actors. Producers and recruiters from the innovative Music Video network interviewed students as prospective show hosts and extras. The MTV casting call was held on campus for people between the ages of 18 and 24. Some 30 students auditioned, hoping for their big entertainment break.

MTV Producer Jonas Larsen explained, “We’re not looking for any particular type,” “We just want someone who can connect to us on an emotional level.” (Desert Dispatch. 2000) (Find MTV logo)

In 2001, it was proposed that the local county library merge with the Barstow College library. In a survey conducted by BCC, it was revealed that 63% of local residents surveyed favored the proposed merging. Funding was raised for a campus state of the art library and learning resource center. The county librarians wanted to merge the local county facility with the new campus learning center.

College President James Meznek said: “We’re just studying it in concept. This is an opportunity for the [college] board to hear from everybody.” (Desert Dispatch, 2001)

“Students are concerned the public will check out books and resources they need for classes. Students also want the county library to remain in the community center…” (Desert Dispatch, Feb. 16, 2001) The Faculty Senate also opposed the merger. After considerable community and campus discussion, the merger proposal was dropped. Construction commenced on the new Learning Resource Center in May 2002. Cost of the project was $7.5 million. 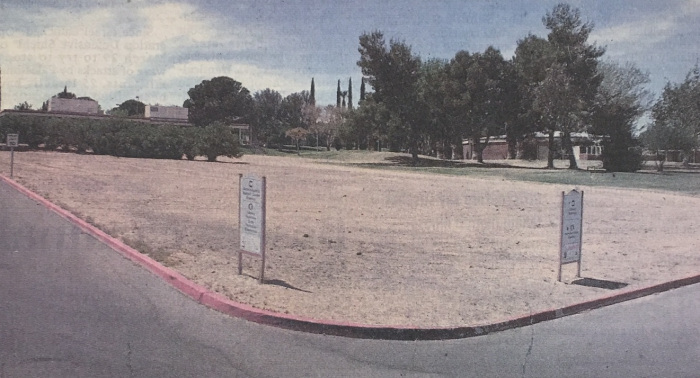 A major accomplishment for Barstow College in the opening decade of the 21st Century was the funding and construction of a state-of-the art learning resource center. Originally part of the campus Master Plan, construction on  the library, compute and office complex commenced on May 30, 2002. Cost of the complex was 5.1 million. College board members and city officials picked up shovels for the official ground breaking. 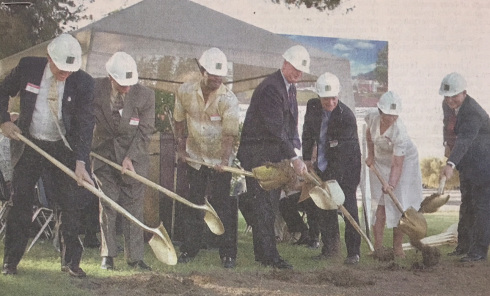 The LRC was the first building fully state financed on the campus since 1976 when the new administration building was constructed.  The center consisted of the college library, a computer commons, offices, video and DVD stations and rest rooms.

‘Watch us as we build the best rural college in California,” board member Fernando Baca explained.” 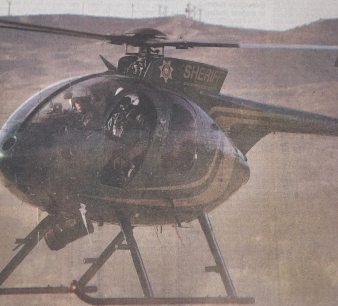 Desert Dispatch, Aug 30, 2002
By Tammy Scholl
BARSTOW – Sheriffs officials suspect the body they found about four miles south of Barstow College Wednesdays that of a 28-year old High Desert woman missing since Sunday night.
“She matches the description of the woman reported missing.” Capt. Warren Nobles of the Barstow Sheriffs station said. “It looks like she died from exposure, not foul play.” The woman name and cause of death will be released by the county coroner after they conduct an autopsy, he said. Nobles said two deputies with the sheriff’s aviation unit discovered the woman’s remains around 4 p.m. Wednesday, about 12 hours after teams of volunteers took to the sky and the sand to find her.

Sheriff’s officials said the woman had a history of taking off for a few days without telling anyone, which is why she was not reported missing Sunday night. Sgt Jake Jecusco said the 28-year old woman was with her boyfriend Sunday night when his car got a flat tire on Barstow Road. “She walked to the Barstow Heights area and residents helped the couple fix the flat,” he said. “But the car only managed to get a few miles before the tire went flat again,” Jecusco said.

The 28-year-old started walking back to the same residence for help, but she never arrived. She was thought to be in the area near the L Street Microwave towers, where the unidentified woman’s body was found.

“Her tracks were pretty straight for a while, then they started circling,” Jecusco said. That’s a sign of confusion, which typically happens when you get dehydrated.” With temperatures hitting the 110-degree mark this week, he speculated she could have survived until Monday afternoon. Noble said more than 15 deputies and volunteers aided in the search effort, including people from Barstow and Wrightwood’s Search & Rescue teams. 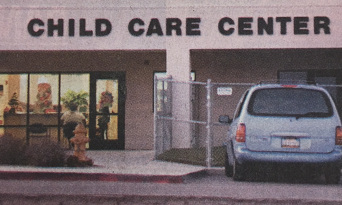 Sadly, due to state funding cutbacks, at the end of 2003, the college closed the campus child care center. The college board made the decision after the Center defaulted on four loan payments to the California Bank and Trust. The board also cited a rise in the cost of  worker compensation as another reason.

Some 140 children were affected by the closure. Many parents relied on the Center to educate and care for their children as student parents attend classes.  Student Randy Hoffman, whose two-year old daughter Katelyn, attended the Center said he was considering enrolling the girl at Barstow Christian School  “She is very upset she has to leave,” he said. “But we don’t have any other choice.” (Desert Dispatch, Dec. 3, 2003)

College instructor Ramon Vasconcellos joined the faculty in 2004. He teaches history, economics and accounting. He has seen many constructive changes on campus, and a few academic challenges.

“Some wonderful things have happened since 2004,” Vasconcellos explained. “About 18 months ago, we opened our Performing Arts Center, which is good for the school and the community. “We have seen increases in faculty numbers to support transferability to California State colleges and universities. And on the structural side—our buildings have all been made earthquake ready” 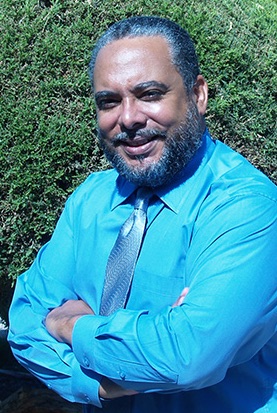 On the academic challenge side, he explained that student competencies in fields of reading, writing and mathematics have taken a dip since the advent of federal programs for lower level education like No Child Left Behind and Common Core.

“We have many programs and opportunities for students to get college ready right here on campus. Many students coming in from the current public school systems need remedial education to bring them up to par. We do it here,” he commented.

Vasconcellos explained that in recent years, the growth of Career Training and Vocational Programs has been a major asset to the college and the community. “This is good because it responds to the (employability) needs of the community—which is part of the mission of a community college,” he said.

Vasconcellos said he remembered when the school offered a nursing program. He said he wished the program would return. “It was a good thing. If the nursing program was resurrected, more students could have fulfilling careers and it would help our new Barstow hospital and other High Desert hospitals like St. Mary’s. It would be a very good thing for everyone.”

The historian explained that in recent years, there has been an upswing in various campus clubs and student-oriented events, “Clubs like the History Club help improve academic success. And vocation clubs help career training students.”

Vasconcellos said he was pleased to see an increase in ethnically-oriented student clubs. They help us appreciate and share in all cultural diversity,” he concluded.

At the dawn of the new century, the college ASG welcomed a new Director of Student Life. Joann Garcia started her BCC career as a part-time  campus events supervisor in 1998. While working part-time, she received an Administrative Justice certificate in 2002. “I came back to school at the age of 42,” Ms.Garcia explained. “I love learning and I like to see other people succeed. So, I pursued my studies.” Ms. Garcia persevered and in  2006, earned her Bachelor’s degree from Park University. She has since won many academic certificates and degrees and strived to be a role model for all students. “I came to Academia late in life. I once worked for the City of Barstow in Parks and Recreation. But after we were laid off, I came to BCC and it changed my life.” 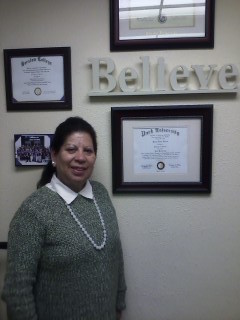 After accepting the ASG appointment, Ms. Garcia worked with students to make a renaissance of the student government group. “We became very active. We stressed academic success as well as personal success and all that ethnic diversity offers,”  Ms. Garcia explained. ‘We formed a Graduation Committee, we upgraded student government and offered greater student recognition. After 911 we became closer with our Veterans and the Veterans Home.”

Ms. Garcia explained that students became involved in the Halloween “Mardi Gras” parade. “We supported the 2000 inaugural Lights of Learning event–to support student scholarships. We took field trips to major campuses like UCLA and the University of Las Vegas. Students became engaged and involved and we continue building relationships and programs today.”

Ms. Garcia explained that development of an ASG Constitution and By-laws was integral to the group’s success. “Students learn the Rules of Order, which helps them in future endeavors.”

“We even make major field trips–like this year (2017) we made a political education trip to Washington, D.C.. I am proud of our students, proud of BCC and look forward to building more bridges to the future.” 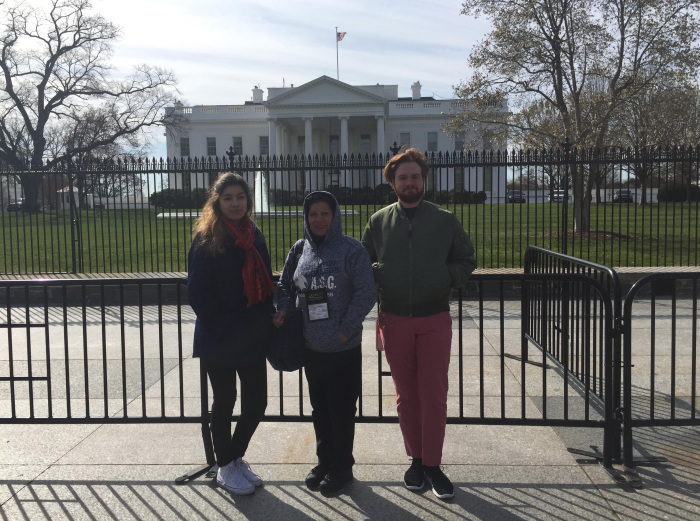